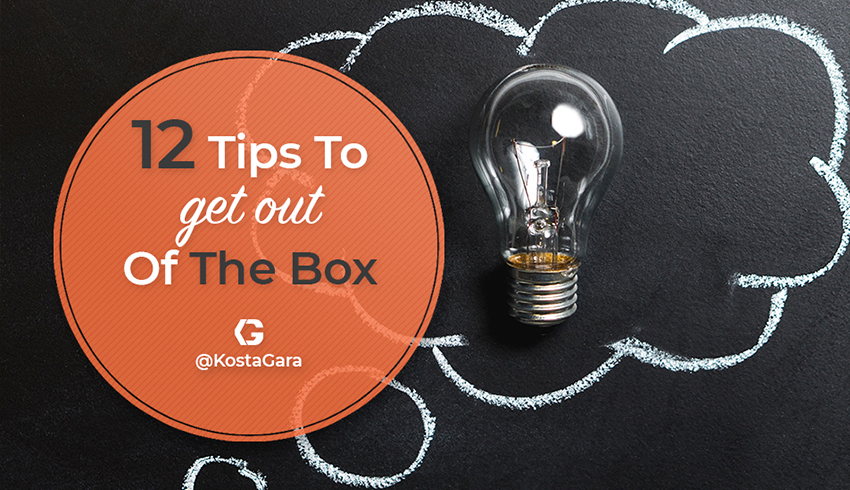 It is that place humans go to that seems safe and in actuality, it is an imprisonment of their minds.

Yes, it is the box. The box that states we should work a 9 to 5 job each week, save our money in an account that gives us very little interest, invest in a retirement plan and then retire to a nice acreage with a white picket fence when we are 65 years old.

And the sad part is…

Many are only able to enjoy that peace and solitude for 5, 6, maybe 7 years.

It is the box! And I am here to tell you that you can, and should escape the box. Because, to succeed as an entrepreneur, you must think, act, live and breathe outside the box.

We open the mind imprisonment…

Here are 12 tips to get out of the box

What you need to understand is that you can easily slip back into the box mentality if you are not aware. I suggest you do a daily evaluation to see if you were in or out of the box.

Get Out Of The Box Tip #1: Break Or Erase Daily Routines

The best place to start is by breaking, changing or erasing many of your daily routines. It is daily routines that allow your attitude to become complacent with living in a box. This doesn’t mean daily routines are bad, but when you are in the process of getting out of the box, it is the starting point.

Instead of getting up, making coffee and reading the morning paper, try going for a brisk walk, taking a shower and then make that coffee.

Just that simple routine break will give you power to break, change or erase other daily routines.

Get Out Of The Box Tip #2: Put Yourself In Opposite Stances Or Beliefs

As entrepreneurs, we network with many people of various nationalities, religions and political beliefs.

It will be hard to do, but you can really break out of that box mentality by using empathy. By putting yourself in the position that person is in.

Wouldn’t it be great if we could get the world’s political and religious leaders to adopt that mentality?

It starts with us.

Get Out Of The Box Tip #3: Imagine Yourself As A Different Persona

Take some time to daydream.

Imagine you are a completely different person in a different time.

These are just a few examples. You can delve into your persona’s problems and successes.

After your dream, you will have a different viewpoint. You will be outside the box.

“Without leaps of imagination, or dreaming, we lose the excitement of possibilities. Dreaming, after all, is a form of planning.” Gloria Steinem

Get Out Of The Box Tip #4: Change Your Media Intake

Now is the time to fill your mind with positive and enlightening information. The television is not usually a great place to get that info.

Why not pick up a book to read?

As a matter of fact, many people have been reading my book, the bible of network marketing, Organic Networker. You can get your copy here.

Get Out Of The Box Tip #5: Make Sentences As You Are Driving

Highway and interstate traffic can be frustrating at times.

Here is a simple game that can relieve the frustration and also adapt your brain to outside the box thinking.

Almost all license plates have letters as well as numbers. Using the letters in order, think and say a sentence with each word starting with the letter on the license plate.

Do this for awhile and you will not be frustrated and creativity will be bleeding from your veins.

Get Out Of The Box Tip #6: Disconnect From Problems

I am not saying to just forget about problems. But what I mean by disconnect is to look at the problem from an outside point of view.

By disconnecting from the problem and looking at it from outside eyes, you will see and understand things you normally would not have even realized.

Get Out Of The Box Tip #7: Involve Team And Tribe Members

Get the team involved!

Encourage outside the box thinking from all.

One of the best ways is to call brainstorming sessions where ideas are thrown out no matter how off-the-wall they are. The idea is quantity and then the ideas will be narrowed down.

The key is to define the box in any given situation and then to seek alternative and sometimes non-conventional solutions that would be considered beyond the norm.

Get Out Of The Box Tip #8: Work It Backwards

The conventional way for solving a problem is to find the source of the problem and work forward until it is solved.

But isn’t getting out of the box meant to be unconventional?

Work it backward… What is the final goal? Now, what action steps should you take to achieve that final goal?

By using this method, you will have desired results instead of “just get by” results.

Get Out Of The Box Tip #9: Break Out The Pencil, Colors or Paints

As entrepreneurs, we are often lodged in the logic areas of our brains. We need to train our brains to easily flow between the logic centers and the creative centers. And for some, this is like crossing Mt. Everest.

To bring that creative flow and give your brain’s logic area a brief vacation, break out…

There are many other ideas too. Just get the creative juices flowing.

When we look at some of the greatest minds of all time, they questioned.

It is by questioning that you will create better, bigger, faster…

“If I had an hour to solve a problem and my life depended on the answer, I would spend the first 55 minutes figuring out the proper questions to ask. For if I knew the proper questions, I could solve the problem in less than 5 minutes.” Albert Einstein

Get Out Of The Box Tip #11: What Is The Worst That Could Happen?

Fear is an entrepreneur’s archenemy. And fear is a business partner with the box.

So the best way to defeat fear and to stay out of the box is to ask yourself with the project you are considering, what is the worst that could happen?

In most cases, the potential benefits greatly outweigh the results that could occur because of failure.

By using this approach, you will take any power fear had to put you in the box.

Get Out Of The Box Tip #12: Make It Positive Or Neutral

Okay, this will be challenging and a whole lot of fun…

We live in a world where negative seems to have majority-rule. But, it doesn’t have to rule you.

I challenge you to turn every thought and sentence you speak into a positive or neutral one.

This is not an easy task but I know it will keep you out of the box because just like fear, the box is in business with negativity.

Institute these tips into your life and you will become a habitual outside the box thinker. It will be as if there was no box at all. Your logic and creative sides will team together in harmony.

Did these tips help you? Do you think you are in or out of the box the largest percentage of your time? What other tips would you give the readers on staying out of the box?

We value your responses and we will diligently strive to answer all questions timely and accurately. So post all comments and questions below.

Thank you for taking the time to read this and if you found value, share it with others on social media.

The One Advice That Helped Me Become A Millionaire

The 3 Hs To Be Successful In Network Marketing