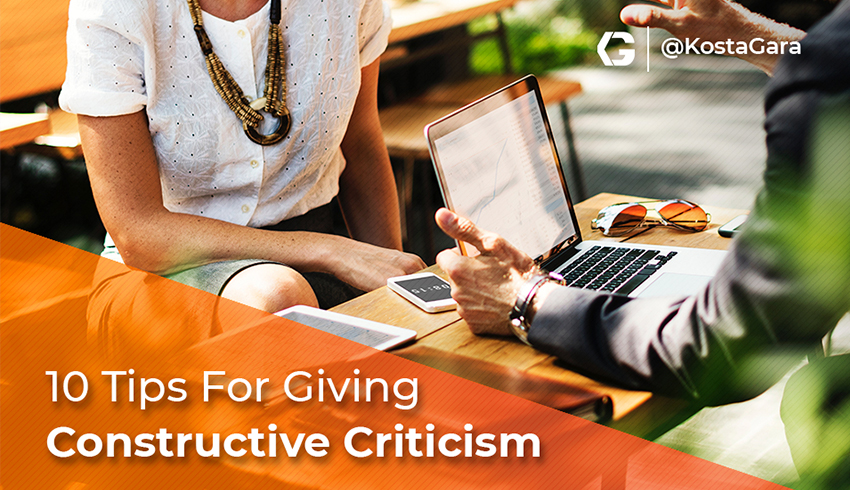 I don’t think anyone actually looks forward to criticism when they are on the receiving end. But we should to a certain extent. Giving constructive criticism helps us learn and grow.

And on the flip side, the leader who looks forward to giving criticism makes me question their ability to lead. Because it really isn’t something you should enjoy. Why? Because if you enjoy giving criticism, many people may consider you a brash and overbearing human.

I delve into giving praise and criticism in chapter 8 of my book, Organic Networker. I strongly suggest you read it. You can get a copy here.

Giving praise is easy, so in today’s post, I am going to give you 10 tips for giving constructive criticism. I suggest you take notes so you can refer to them whenever you are in a position where it is required.

Studies show that if a leader starts any meeting or conversation with a subordinate on a negative, the subordinate will usually

And even if criticism is meant to be constructive, if you start with it, it will be perceived as negative.

Leader: “(name), you have been improving greatly at recruiting into the business. I have been seeing your numbers and I must commend you on your hard work and persistence.

Subordinate: (with a smile) “Thank you.”

Leader: “You are welcome, keep up the great stuff! I wanted to talk with you today because we had a complaint that it was stated (product) can cure (disease). I know that it may have been just a slip of words, but I need to tell you that all of us including you can get in serious trouble by making claims such as these. Please never do that again and do me a favor and read through this training manual thoroughly so you understand what we can and cannot claim.” (hand him/her manual and tell them the pages that have the info).

Subordinate: “I don’t think I said anything like that.”

Leader: “Oh, I believe you would never do something like that intentionally. I have witnessed your great recruitments and it seems none of them are saying anything like that, so I expect it may have been a misunderstanding or you may have possibly said something meaning one thing but perceived a different way. All I ask is to just review the info and just consider what you say a bit closer. And keep up the great work. You are going to get to Diamond soon, I am sure.”

You see, the conversation started and ended on a positive so the subordinate will not feel as if they are in a corner. They leave feeling the trust of the leader and will follow the system closer.

As in the example in tip #1, the primary goal was stated… Recruiting!

No matter the constructive criticism, the shared primary goal should be mentioned. This way, the person will understand that you are both seeking the same final result.

When we set goals, we need a roadmap to reach those goals. That map consists of objectives and by successfully completing each objective, we move towards successful completion of the primary goal.

In many cases, when a subordinate needs to be constructively critiqued, it is because he/she failed at completing an objective. So you may need to take a close look at the objectives and manipulate or completely set new ones so the primary goal can be attained.

Giving Constructive Criticism Tip #4: Listen To What The Subordinate Has To Say

This is extremely important!

Sometimes we can enter a critiquing session planning everything we have to say and do, that we neglect to give the other person a chance to talk.

Sometimes that person has information that you didn’t know or consider that could help you strategize so the subordinate can better reach the ultimate goal.

Not to mention, by giving him/her an opportunity to speak, you are showing that you do care what he/she has to say.

Giving Constructive Criticism Tip #5: It Should Never Be Personal

You want the perception that you are not attacking the person, just the situation. Instead of using terms like you could have, you should have or anything like that, always make the statement fall on either the situation or what you (the leader) sees can be done.

Just take another look at the example in tip #1 and see how the leader kept the attack on the issue and not on the person.

Giving Constructive Criticism Tip #6: Be Aware Of Your Tone And Demeanor

Having a critiquing session immediately after arguing with one of your children about an issue they are having at school may not be the best idea. It can be easy to reflect your displeasure with your child in the conversation with the subordinate.

Your tone and demeanor during a constructive criticism meeting can determine if the person will listen and heed your words or negate the entire conversation.

There is a common rule that says, praise in public, critique in private. I suggest you follow that rule religiously.

By critiquing a subordinate in front of others, you put them in a demeaning place and no good can come from it.

This is another area that is extremely important. You don’t want to wait too long to give feedback because it may seem like you are attacking the person with “old news.” But, you also don’t want to pick timing that may affect the person’s output.

We can use the example in tip #1 here… Let’s say you tagged along with the person on a recruiting session and during that session, he/she made the mistake of claiming a medical cure. But they also recruited the person who does seem like they will be great in the business. Instead of critiquing the individual immediately while they are pumped up about their win, I suggest saying something like, “I am going to write down the pros and cons I saw during this recruiting session and share them with you tomorrow… Great job today! The list I make will help you do even better!”

The best way to do this is to use empathy. How would you feel if you were critiqued at this particular time?

It always helps in a critiquing session if the person getting the critique knows the leader has made the same or similar mistakes. Tell a story about the time you made an error and had to be critiqued. By doing so, the person will not feel like a lone soldier and that mistakes happen. The key is to “get back on the bike and pedal.”

Giving Constructive Criticism Tip #10: Consider If You Need To Or If It Really Needs To Be Said At All

This is another area that requires strategic thinking…

Could it be that the person just had a bad day and made an error? And error they have never made before and will be evident to him/her without getting critiqued?

In some cases, it may be best just to let it go unless it happens again.

The second part of this is, would the critique maybe come better from a different team member than you?

It may be in your best interest at times to delegate the critiquing session to another person who seems to have a way with that individual.

Giving constructive criticism is a part of competent leadership. So it just makes good sense how to do so properly to get the best reactions.

No, I must say that no 2 individuals are alike. It does help to get to know your subordinates on a deeper level. This will give you a good idea on ways to critique them without them feeling like you are attacking them personally.

Again, Chapter 8 of Organic Networker goes into this area. Put it together with all the other information in the book to develop your leadership excellence and grow your business huge.

Just click here to get your copy of Organic Networker just for the cost of shipping and handling if you live in the United States.

And be sure to stay tuned to this blog for upcoming information to help you turn your dreams into reality.

Thank you and have a wonderful day.